As we have noted in a recent comparison of JavaScript frameworks, React is a great technology for building large scale high traffic applications. First of all, it assures superior speed and performance. Second, it is highly testable, which makes debugging process quick and efficient. Last but not least, React allows unifying the code for web and mobile applications through the use of React Native. This is why, React is one of the major technologies Agiliway uses for web and mobile development. The successful use of React in one of our recent cases demonstrates well the potential of this JavaScript library to solve complex technological tasks.

The client addressed Agiliway experiencing a lot of issues with the GPS tracking system due to the outdated architecture it used. In particular, the company’s clients were complaining of

What is more, the existing solution did not allow the company to add new features and, thus, cater to the rising needs and expectations or the clients.

To address the needs of the client, Agiliway suggested rewriting a system using React. Although this was a serious endeavor, it substantially improved the performance and expanded the functionality of the tracking system. Namely, the benefits of the provided solution involve: 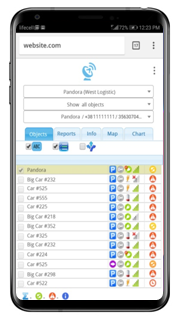 Rewriting the GPS tracking system on React and creating a React Native mobile application for it, Agiliway has revolutionised the work with the system and client’s business as such. In particular, the new features and the stable performance of the system allows effective tracking of vehicles and routes and facilitates work of logistics specialists. In addition, the availability of the mobile application and instant notifications gives car owners much more control over their vehicles not keeping them tied to the computer screens.

Leveraging the latest innovations in the IT industry and selling a high-speed and user-friendly solution, the company benefits hundreds of end users and steadily grows its profits.

Hello, everyone! Once again, we meet with you on our tech news column. Here, therefore, END_OF_DOCUMENT_TOKEN_TO_BE_REPLACED

Can you imagine your life without your mobile phone? Doubtfully. It is not only about END_OF_DOCUMENT_TOKEN_TO_BE_REPLACED