Choosing a programming style has been a matter of heated discussion for years. Whether you incline more towards declarative or imperative paradigms, they both have a lot to offer. If you are a seasoned professional wanting to develop your expertise and learn additional languages or a client seeking help in developing software that will satisfy all your business needs, this article will come in handy.

It is crucial to make a choice of programming paradigm based on the type of project and its requirements as the primary goal is to provide a perfect solution that covers all the client’s needs. In our article, we are analyzing the key features of Functional (FP) and Object-Oriented Programming (OOP), their pros and cons.

Pros and cons of Functional Programming vs Object-Oriented Programming

Inventing something new in the programming world, as elsewhere, is achieved through multiple attempts and manipulations. Sometimes decades go by before these ideas become mainstream and spread across the industry. One of the outstanding examples is Java, one of the leading programming languages today. Before becoming one, it was heavily criticized for being slow and consuming a large amount of memory. The revolution in the machinery, however, changed that situation. As we see, some technological advancements may just be ahead of their time.

When we analyze the two types of programming we shall remember that they belong to either declarative model (FP), where the code serves as a description of what you’re aiming to do, or imperative model (OOP) that utilizes multiple commands responsible for a specific action.

So, what are the main peculiarities of FP and OOP? 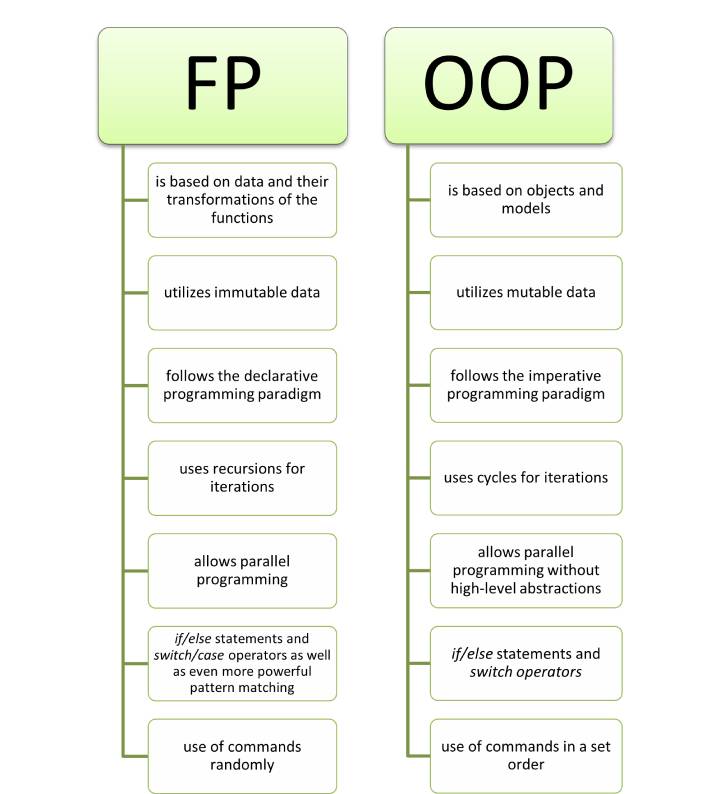 OOP utilizes methods and objects programmed for describing real things. Objects represented by the object-oriented languages can be reusable owing to mutable data features, hence, many things can be created with just a few processes.

OOP comprises of the four pillars:

Among the key elements of the FP it is worth singling out the following:

When it comes to comparing Functional and Object-oriented programming, it is always important to bear in mind the purpose of each of them. Both approaches are targeting functionality, simple comprehension, and swift development. At the same time, they use different storage methods as well as ways to manipulate the data.

One of the major differences between the two approaches is that Functional programming focuses on data and their transformations of the functions whereas Object-oriented is based on objects and models.

Hello, everyone! Once again, we meet with you on our tech news column. Here, therefore, END_OF_DOCUMENT_TOKEN_TO_BE_REPLACED

Can you imagine your life without your mobile phone? Doubtfully. It is not only about END_OF_DOCUMENT_TOKEN_TO_BE_REPLACED